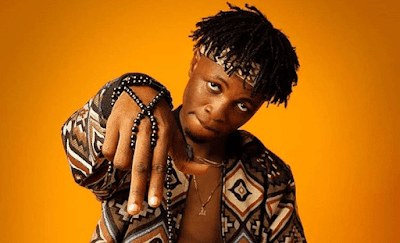 Laycon is a 27-year-old singer and rapper from Lagos. He was born on the 8th of November, 1993 in Lagos, Nigeria. He is a native of Bajuwen, Odeda, Ogun State. He's a graduate of philosophy from the University of Lagos. He graduated in 2016 with a second class upper degree. He started his musical journey at an early age and has now emerged as one of Nigeria’s most promising new school acts. He describes himself as being versatile and able to coin words together to soothe scenarios and moods.

Laycon as an undergraduate in the university of Lagos, interned as the personal assistant to the MD and CEO of Latjum Global Nigeria Limited. After graduating from the university, he moved to Bestman Games, Ikoyi, Lagos where he worked as a sales and business development personnel. Two months later, he became the personal assistant to the assistant director of welfare in administration and human resources at Lagos State Ministry of Information and Strategy. He also worked as a freelance writer for different companies and establishments.

Laycon entered the Big Brother Naija show as the 19th contestant on 19th of July 2020 and captured the heart of his fans known as ICONS. He became the first housemate of the season to be verified on Instagram on 22nd of July 2020. He broke record, becoming the first housemate in the show's history to reach one million followers on Instagram while still in the house on 19th September 2020. During the finale of the show on 27 September 2020, he was declared the winner scoring a record 60% of the total votes cast and went home with the ₦85 million grand prize.

After Laycon won the Big Brother show, on the 6th of October 2020, he was appointed as the youth ambassador by the governor of Ogun State, Dapo Abiodun.

In 2014, he was among the ten artistes that performed at the 2014 Coke Studio University of Lagos event. He was also a top ten finalists of the 2017 MTV Base LSB challenge. Laycon signed into Fierce Nation record label in 2019. On 21 February 2019, he released a track, "Fierce" with Chinko Ekun and Reminisce from his second EP Who Is Laycon? He released another single "Senseless" on 28 August 2020.

Laycon released the video of his latest song 'HipHop' just a day after he signed a partnership for ShowMax first-ever reality series. Laycon featured singer Deshinor in the new song which was produced by Echo The Guru.

Laycon believes that Facts don't care about your feelings. Currently, his biggest achievement was having his song 'Fierce' on MTV BASE Top ten charts for six months.