Asisat Lamina Oshoala is a Nigerian professional football / soccer striker who plays for Spanish side FC Barcelona Femení in the Primera División and captains the Nigerian national team. She was born into a Muslim family on the 9th of October, 1994 in the Ikorodu suburb of Lagos State. Despite being born and bred in Ikorodu, she started her basic football in Mushin, and this was in total defiance to the stand of her parents. Considering her achievements so far in her career, it’s safe to say that the parents who refused to let Asisat play soccer, would now be proud a parents of a football star. 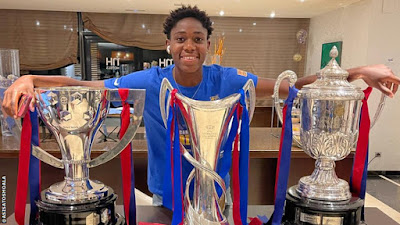 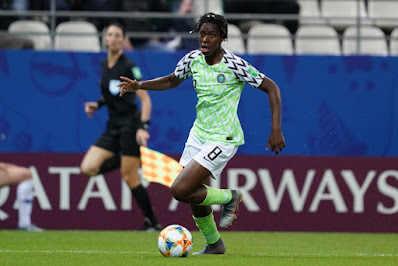 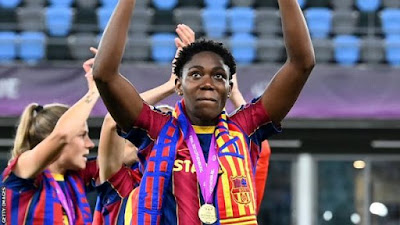 At Rivers Angels, Asisat broke into limelight when she represented Nigeria at the 2014 FIFA U-20 Women’s World Cup in Canada. She emerged as the top scorer with seven goals and was named the Player of the Tournament. Her performance helped Nigeria to finish the tournament as the runner-up. After her outstanding performance in Canada, she was named best player and second top goalscorer with the Super Falcons team who won the 2014 African Women’s Championship.

On 23rd of January 2015, Asisat joined Liverpool in England's Women's Super League. The club's manager, Matt Beard, called her "one of the best young players in the world". Despite missing two months of the 2015 season with a knee injury, she scored three goals in the nine games in which she played as defending champions. Liverpool reported that a transfer bid from Arsenal had activated the release clause in Asisat's contract and that she was discussing personal terms with the London club.

In March 2016, Asisat signed with Arsenal. Arsenal manager, Pedro Losa said of her signing, "Asisat is a fantastic talent and will be a great addition to our squad. She is quick, with excellent feet and has proven she can score goals so it's very positive she has decided to join us." She helped Arsenal win the 2016 FA Women's Cup Final on 14 May.

On 31st of January 2019, Spanish club FC Barcelona Femení signed Asisat on a loan deal until the end of the season. On May 31, 2019, Barcelona announced her full transfer to the club and extension until 2022. She scored seven goals in her seven appearances for the club during the 2018-19 season. She scored Barcelona's only goal in a 4–1 defeat to Lyon in the 2019 UEFA Women's Champions League Final. She was the first African (and Nigerian) to score in a Champions League Final. She became the first African woman to win the UEFA Champions League, after coming on in the 71st minute of the finals with Barcelona defeating Chelsea 4–0.

Asisat is a good example for aspiring female footballers. With the support of the Lagos state government, she set up the Asisat Oshoala Foundation to help youngsters seek after their football dream and give them the necessary chance she never had.