Oluwatunmise Idowu, is a 14 year old student of Scholars Universal Secondary School, Ota, Ogun State. She became famous last year 2016 when she broke the record of 15 answered questions in 60 seconds set in 2015 by Ayodeji Akinkuowo of Adeyemi Demonstration College, Ondo State in the Cowbellpedia Mathematics Television. 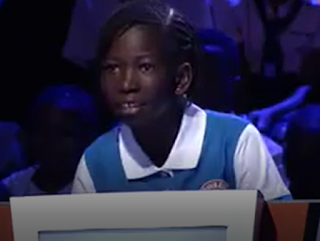 Osoba, the only male contestant in the group crashed out after the first round to pave way for an all-female encounter in the second round. This involved a test of contestants’ speed and accuracy as they were required to answer as many questions as possible in 60 seconds. Idowu in ‘battle’ with Abduwaheed and Okon, eventually answered 17 questions in 60 Seconds to beat the record of 15/60 seconds set in 2015 by Ayodeji Akinkuowo of Adeyemi Demonstration College, Ondo State.
at 11:39

Email ThisBlogThis!Share to TwitterShare to FacebookShare to Pinterest
Labels: Lifestyle